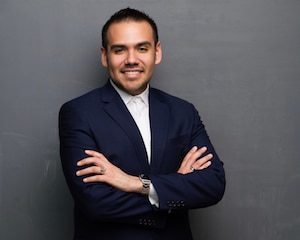 Zak Martinez, an associate at Duffee + Eitzen, was born in Dallas, and raised in the nearby suburb of Rockwall, where he graduated from Rockwall High School in 2010. He attended Southern Methodist University, where he received a Bachelor of Arts degree in Economics and Religious Studies.

After graduating from SMU, Mr. Martinez went on to attend Texas A&M University School of Law in Fort Worth. He was selected as a Public Service Law Fellow during his first year of law school. As a Fellow, he completed hundreds of hours of pro bono public service work at the Sacramento County District Attorney’s Office in California. Mr. Martinez then served on the Board of the Fellowship at his law school, planning fundraising events, and encouraging other law students to participate in pro bono public service work. During the summer after his second year, he was selected as a specialized intern for the family violence unit at the Rockwall County District Attorney’s Office in his hometown. It was while working here that he found a passion in helping people get out of toxic situations, which led him to want to work in family law.

Mr. Martinez did some of his coursework at the University of San Francisco School of Law in the Bay Area. There, he expanded his legal portfolio by taking classes like Maritime Law and International Human Rights, and also participated in the LGBT law student organization, OUTlaw, and the Criminal Law Society.

After he graduated law school in 2017, Mr. Martinez took the bar exam and was admitted to practice in Texas in November 2017. He also took the Uniform Bar Exam, and was admitted to practice in the State of Colorado in January 2019, and to the State of Utah in May 2019. He clerked for a labor and employment law firm in Dallas, where he gained valuable insight into civil law proceedings before he joined Duffee + Eitzen in 2018. He has a penchant for travel and aviation, his favorite destination being Hong Kong. He also enjoys spending time with his parents, former and current Dallas Police Detectives, and his younger sister, Brooke, a student at Rockwall High School.