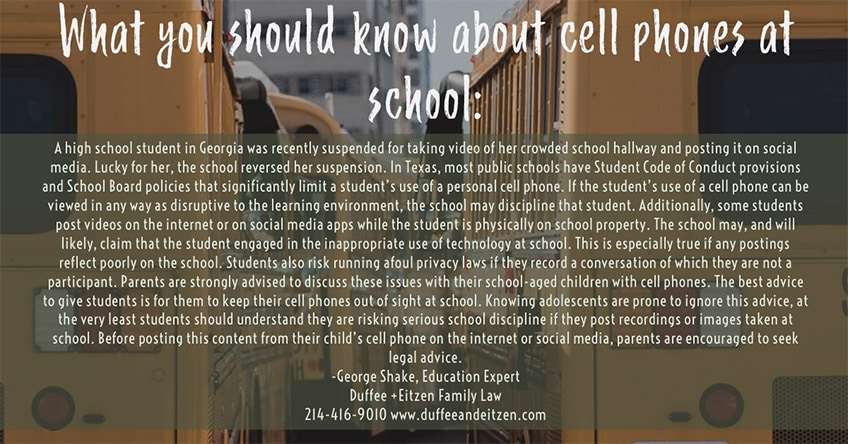 A high school student in Georgia was recently suspended for taking video of her crowded school hallway and posting it on social media.   Lucky for her, the school reversed her suspension.   In Texas, most public schools have Student Code of Conduct provisions and School Board policies that significantly limit a student’s use of a personal cell phone.   If the student’s use of a cell phone can be viewed in any way as disruptive to the learning environment, the school may discipline that student.   Additionally, some students post videos on the internet or on social media apps while the student is physically on school property.  The school may, and will likely, claim that the student engaged in the inappropriate use of technology at school.   This is especially true if any postings reflect poorly on the school.   Students also risk running afoul privacy laws if they record  a conversation of which they are not a participant.   Parents are strongly advised to discuss these issues with their school-aged children with cell phones.    The best advice to give students is for them to keep their cell phones out of sight at school.   Knowing adolescents are prone to ignore this advice, at the very least students should understand they are risking serious school discipline if they post recordings or images taken at school.    Before posting this content from their child’s cell phone on the internet or social media, parents are encouraged to seek legal advice. 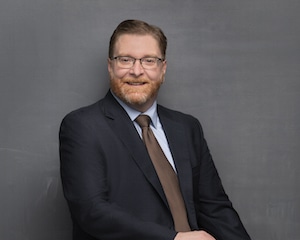 George Shake, a partner with Duffee + Eitzen, L.L.P., has been practicing law in the Dallas/Fort Worth area since graduating from the Southern Methodist University Dedman School of Law. He practices family law and special education law. George received undergraduate degrees in English Literature and Business from the City University of New York. George received a Master’s degree in School Psychology from the University of North Texas and became licensed to practice school psychology.
He worked with families directly for several years, assessing children and helping parents and schools to create educational programs for those children. George developed specialties in ADHD and Autism and has participated in countless special education meetings, discipline meetings, and teacher conferences. He has held administrative positions in several local public schools. He has written policies and trained school personnel to comply with federal and state regulations for serving children with special needs.George has been working on behalf of individuals with disabilities for twenty-five years and training professionals throughout the Dallas area for fifteen years. George’s work in family law often involves families with children with disabilities.