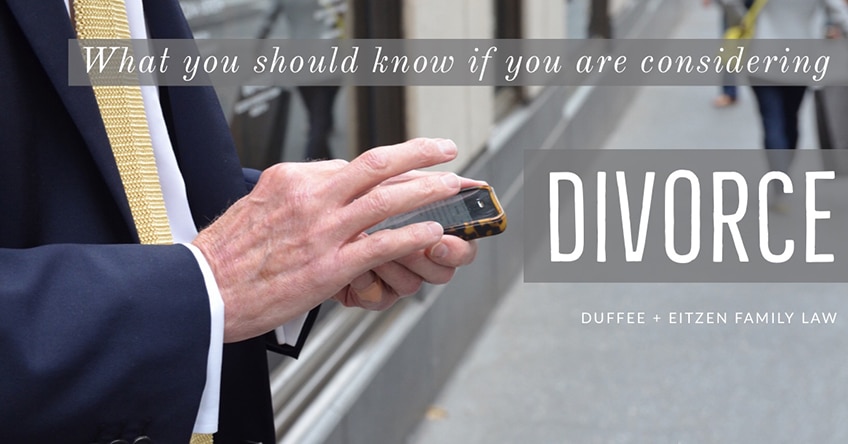 31 JulWhat You Should Know If You Are Considering Divorce

The decision to divorce is never an easy one. Emotions are likely to be intense on both sides, which makes it important to watch your behavior and bring your best self to the situation. We put together a list of things that we consider to be common sense that might be worth reviewing if you or someone you know is considering divorce in Texas:

You Are Married Until You Are Divorced

The main reason that it is advisable to refrain from relationships while you are still married (besides the moral and ethical considerations) is not because of the possible reaction from the Judge or jury, but because it will enrage your spouse and cause your case to become much more expensive financially and emotionally for your family. If you have children, it will make it much more difficult to co-parent post-divorce and much harder for your soon to be ex-spouse to accept the new person in your children’s lives if the new person is viewed as the “homewrecker.”

Be aware that lawyers can always get records of the phone numbers that someone is texting, and sometimes can obtain the text messages themselves.

Texting, calling, Facetime…the best way to find out if someone is having an affair is by pulling his or her phone records. People who are having affairs talk a lot and send a lot of text messages. They also tend to talk and text at strange hours and on holidays.

Information You Do Not Want Your Spouse to Find

If you send data into the universe or store it on your cell phone, iPad or computer, there is always a risk that someone will find it or be able to restore it. It is very difficult to truly delete something.

As an example, Sam opened secret accounts in the Bahamas. He was moving community monies to these accounts to hide it from his wife Liz. Sam had records that would prove this on his computer at home. Liz’s lawyer subpoenaed his hard drive. Before turning it over to comply with the subpoena, Sam erased the hard drive or erased the information about the accounts. Liz took it to a forensic computer expert and they were able to restore 95 percent of the information. Now Sam was in trouble for having the hidden accounts and for destroying evidence. Liz was smart because she obtained the computer quickly after the deleting occurred. The more time and work done on the computer after the deleting, the lower the chances are of recovering data.

It is possible to subpoena toll tag records which show the exact date and time that a car went through a specific toll booth.

As an example, Jessica claims that she is not having an affair with Ryan, but her husband Jeff thinks that she is. Jeff’s lawyer subpoenas her toll tag records. Ryan lives near Exit 4 on the Tollway. The toll tag records show that Jessica is regularly going through that tollbooth late at night or early in the morning or when Jeff is out of town on business. Jessica has no other explanation for being in that part of town during those hours.

Some types of recording are legal and some are considered wiretapping which is highly illegal and considered a federal offense. It is important to be clear about the difference.

On the other hand, if John is talking to his mistress on the phone in the house and Jane picks up another extension and listens in and records the conversation, this is highly illegal because John and his mistress did not know that Jane was on the phone.

As another example, let’s say John and Jane are talking in person and Jane has a recording device in her pocket and she records John calling her ugly names and cursing at her. This is legal and she can play the recording for the Judge.

Alternatively, let’s say Jane puts a recording device in John’s car under the seat and John does not know it is there. She records him talking to his mistress in the car. This is highly illegal. Jane cannot play this for the Judge and, in fact, Jane could be federally prosecuted for illegal wiretapping.

Assume Your Photo is Being Taken

One good rule of thumb when you are going through a divorce is to assume that the other lawyer has hired a private investigator to follow you and take your photograph. And also be aware that the Judge or jury will believe that where there is smoke there is fire.

Therefore, Leslie should not risk a photo being taken of her coming out of Jake’s house at 2:00 a.m. Even though Jake is just a friend and she was just crying on his shoulder and nothing romantic happened. If her husband Chris or a Judge or jury sees a photo of Leslie coming out of Jake’s house at 2:00 a.m., they WILL conclude that she is having an affair with Jake. That is enough proof. Fred does not have to obtain a photo of Leslie and Jake “in the act” for the Judge and jury to conclude that in fact, adultery has occurred.

On occasion, someone will make a false allegation to gain leverage or improve their position in the divorce case. For example, Elizabeth may lie and say that she thinks her husband Sebastian has sexually assaulted their 3-year old child. She may tell that lie thinking it will help her win the custody fight. Besides the obvious moral and ethical problems with this, most lies are found out. In other words, making a false allegation almost always backfires on the person telling the lie.

The Internet as a Source of Information

You cannot believe everything you read on the Internet. The Internet is a wonderful resource, but be aware that there is no gatekeeper screening who is posting out there. Articles, websites, blog posts, comments, and self-proclaimed “experts” may be accurate or may not. Also, when it comes to divorce, every state has different laws and laws can change over time.

First piece of advice,
do not have a girlfriend or boyfriend until after you are divorced.

Second piece of advice,
if it is too late for the first piece of advice, tell your girlfriend or boyfriend not to post photos of you or your children on his or her page.

As an example, let’s assume Drew and Cassidy are divorcing and have a baby named Chloe. Drew is having an affair with Kelsey. Kelsey posts a photo of her- self with Drew and baby Chloe on her social media page where her nickname is “BlondBombShell”. She also posts something rude about Cassidy on the site. Cassidy’s friends discover this, print out the page and show it to Cassidy. Cassidy gives it to her lawyer. Her lawyer files a motion for an injunction asking the Court to require Kelsey, the BlondBombShell, to remove the photo of the child from the website and prohibiting her from posting any photos of the child in the future. Cassidy believes it can be unsafe to post photos of children on the internet, especially in Kelsey’s circles. The Judge agrees and orders Kelsey to take down the photos. Unfortunately for Drew, this is the first hearing in his case and the first impression that the Court has of him. It is not a positive first impression and he did not even know that Kelsey was posting this on the internet. He certainly did not give her permission to do so.

When is it a breach to hack into your spouse’s computer? This is an unclear and complicated area of law. There is not a specific answer, but here is some general guidance. The Court is measuring the level to which a husband or wife had an expectation of privacy.

As an example, let’s say the husband’s computer is at his office away from the home and is password protected. The wife does not have keys to the office and does not know his password. In this situation, it would definitely be a violation of the law for her to access that computer data.

On the other hand, if the husband’s computer is the home computer, multiple family members use it and it is not password protected, any information on that computer would likely be legitimately acquired. Husband really had no expectation of privacy in that example.

You can see that there could be various other situations that fall between these two examples. Perhaps it is not the home computer, but the husband brings his laptop home every night and it is not password protected and from time to time a family member uses it. That scenario could probably go either way.

It is very common during a divorce for spouses to try to read each other’s emails and to try to monitor each other’s banking and credit card use online. One problem this creates is that each person is probably having confidential communications with their lawyer via email.

It is important to change your passwords to new passwords that your spouse would never guess. Most people know the common passwords used by their spouse. Do not use those. Come up with a password that he or she would never dream of and that has nothing to do with you.