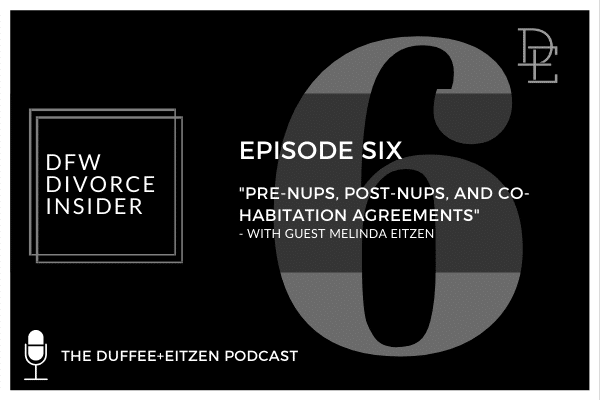 Timely during covid19 as many people have delayed their weddings, and maybe they meant to get a prenup and didn’t get around to it.
Its good to get educated on what would happen without one.

What is a Prenup:
A contract that allows people to change what would happen to their property in the situation of death or divorce, which would be different than the automatic defaults of the law.

What would happen in divorce without a prenup in Texas?
The court divides your community property in a fair and just manner. Community property is anything you have acquired during the marriage w the exception of inheritance or gift, or something that you owned prior to your marriage that still exists (that you can trace from the ownership through to today).

An example would be a 401k that you have long before you get married. Just say you get married and then get divorced….any money that the 401k made since the day you were married would be considered community property. The burden of proof would be on you to go back, just say twenty years, to prove that you had that before you got married, and to prove which part of that 401k would not be considered community property. Most institutions do not keep records that go that far back, and most people do not either. So the value of a pre-nup in this situation is that it would have identified it up front as separate property.

The other issue is that without a prenup, even the dividend payments are considered community property, so things get further complicated.

What can you NOT accomplish in a prenup?
Things related to children, like future custody or future child support would be against public policy.

Post-nup
A contract that you enter into while you are married, to change your ownership interest in your property while you are still married.

Are there any differences in what you are able to accomplish with a postnup vs a prenup
They are very similar, actually. Sometimes people do it bc they got married in a hurry and didn’t have time to address specific issues. Another reason people might enter into a postnup is to salvage their relationship because they are having conflict about money. Like for example, if a husband is a big risk taker when it comes to business, making big money and losing big money. The wife did not have a high tolerance for risk, so they did a post nup, dividing future earnings and debt where they were each responsible for their own.

None of these contracts prohibit people from making gifts, if they chose to be generous.

Prenups and postnups are more common in second marriages or later in life marriages when there are children and there might be concern about inheritance.

Cohabitation Agreement
Also a contract, but for 2 people who are not married but living together in a relationship. This is document to be signed by both parties, that details how daily living expenses will be paid. To prevent misunderstandings – like who pays for what, or whether one person pays for everything for two years and then they break up- what is the understanding on who owes what.

No property is being accumulated together in this scenario.

Can you be married and not know it?
Can you be accidentally married?
Common law Marriage – 3 prong test to determine whether you are
1) You live together as a married couple
2) You agree between yourself that you are married AND
3) You hold yourself out as married – like introducing each other as husband/wife, filing a joint tax return as husband/wife, filing the other person on your health insurance as your spouse, or you don’t correct others who refer to you as a married couple.

If you hold yourself out as married, you are JUST AS MARRIED as if you stood in front of a judge or a minister. There’s no such thing as kind of married.

Another way this comes up is in probate court, in the case of death, where property rights would be different if you were married vs not.

Some couples enter into a cohabitation agreement to eliminate any chance of this dispute (married or not ) down the line when they decide to live together. So for legal purposes, some people want to make crystal clear that they are not married, stating that if they do decide to get married, they will either do so formally or sign another agreement saying that they are common law married.

In any of these agreements, both parties need to have their own attorneys.
It is better not to be signing an agreement just before walking down the aisle.
There is a lot of caselaw out there about the enforceability of prenups. They should not be signed under pressure.
Full disclosure is required of assets and debts for prenups in order for them to be valid, so they are waving their rights knowingly.
If you sign it, plan to be held to the terms of the contract… Texas courts believe in holding people to their contracts.